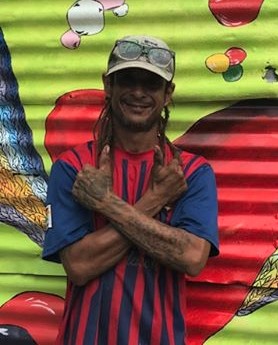 Thanks to a gentle prodding and a local artist, what was once an unattractive tin wall is now a work of art that the neighborhood or San Vicente can be proud of. It started out as a scrap fence of metal and block. The neighbors came around first to paint it all white ~ A Perfect blank slate for for the artwork that followed!

Local resident and yoga instructor, Joan Quilico, moved into her beach house in San Vicente, Puerto Armuelles in February 2019. Although the beach was visible across the street, her daily view also consisted of an unattractive rusty zinc wall. She had an idea that if it could be painted with angel wings it would not only look beautiful but could be a place people could come hang out and take pictures. Joan asked the owner of the wall if she could paint it and showed ideas of what it could become. The neighbor said yes!

Joan looked for artists locally that would be interested in painting the wall. One was recommended by the people in the area. He goes by Rasta but his name is Ivan Juvado. She told him that she wanted his interpretation of angel wings and a mural that would represent San Vicente. What he created is so incredible! And it brought together the entire neighborhood.

Some of the men made seats out of logs and painted them. Others cleaned out the area and set up a platform to stand on for taking pictures. People commented positively on the mural and everyone loved it. A police chief stopped and hired Rasta to paint for him ~ Maybe a new trend has begun! Angel Wings, in San Vicente has already become a place to visit in Puerto Armuelles. 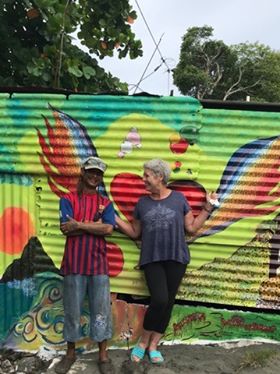 Joan: “It makes me so happy to see the joy spreading. I hope that San Vicente and Angel Wings become a place that people want to come to and take pictures.” That is exactly what is happening. If you are looking for a good photo backdrop, head out to San Vicente on the beach road between Rokero and Tsunami Inn.