Part 8: Ships and an Earthquake 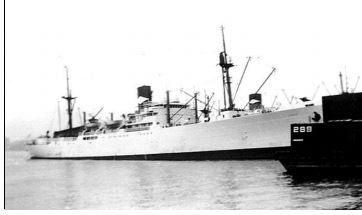 In the summer of 1932, with savings of about $300, I went on vacation, flying to Panama City and taking a Company ship from Cristobal, via Kingston, Jamaica, where it loaded bananas, to New York. The ship was filled up with paying passengers and the only space for a Company freeloader was a bunk in the medical emergency room – but it served the purpose. 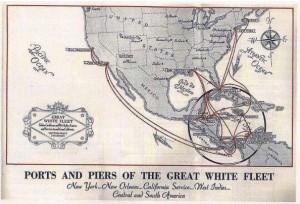 The passengers, who had boarded in New York, were mostly young female school teachers or store clerks on their summer vacation. Of course before the ship got to Cristobal its officers had the pick of the crop but there were still quite a few left looking for a guy to buy them drinks. I rode the New Haven railroad “Owl” sleeper express from New York to Boston, midnight to 7 A.M., and spent three weeks with my family and visiting many of the scenes of my youthful adventures.

How places and people, had changed in just the four years since my last vacation in the States. The great depression was really setting in then, all over the States and with me; after the boat trip up! But I got a small “advance” from the Boston office to get me back to Panama. 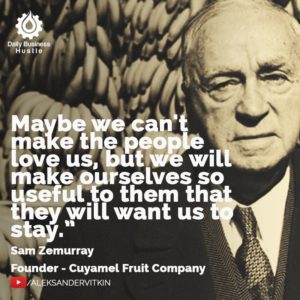 Catching up with a little Company history, in 1930 the Company bought out the Cuyamel Fruit Co. from Sam Zemurray for $31,500,000 in Company stock, making Sam the largest stockholder. Cuyamel had been a small ‘competitor in Honduras and owned most of the land across the Ulua river from that of the Tela Railroad Company (UFCO). The Cuyamel headquarters was in La Lima and its wharf in Puerto Cortez. So now the Company had three ports in Honduras.- Cortez, Tela and Castilla. The Standard Fruit Company (a competitor) wharf was at the port of La Ceiba and their banana farms were up the Aguan river valley.

The great depression had taken its toll on the UFCO and the value of its stock declined drastically. Zemurray didn’t like that so he went to Boston in 1932 and confronted the board of directors. I quote from Tom McCann’s book “an American Company – The Tragedy of United Fruit Company”. (I knew Tom very well). “He was greeted, frostily at best, by a board of directors which included Daniel Gould Wing, then chairman of the’ powerful First National Bank of Boston; former Massachusetts governor Channing H. Cox; (both Wing and Cox were direct descendants of American presidential families, the Jeffersons and the Coolidges) the Lee (half of Boston’s most prestigious investment firm, Lee Higginson); and Bradley Webster Palmer, a leading Boston lawyer.

Zemurray presented an incisive review of the Company’s mismanagement, backed by a bill of particulars which included the fact that the stock of United Fruit Company had declined by almost 90 percent since he had become a shareholder. He demanded to know what the board intended to do.

Daniel Gould Wing responded for the other directors. He smiled thinly and in a reference to Zemurray’s accent said “Unfortunately, Mr. Zemurray, I can’t understand a word you say”. Zemurray just looked at Wing for a few seconds and then at the other Brahmin faces around the room. The story goes that he muttered something under his breath as he left. He returned shortly with his hands full of enough proxies to make translation unnecessary. 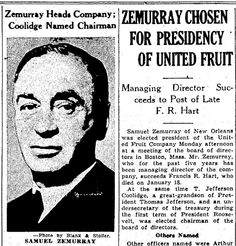 Slapping them down on the long oval table at 1 Federal Street; and speaking very clearly to avoid being misunderstood, Zemurray said “you gentlemen have been fucking up this business long enough. I’m going to straighten it out”. Wing and his clique were dumped from the board and Zemurray was back in bananas.”

He dealt effectively with all problems for the next 20 years.

He repeatedly returned to the tropics where he could see the real United Fruit of men and machetes and machinery and vast plantations close at hand. He never confused that United Fruit with the Company in Boston, the United Fruit of paper and proxies, meetings and numbers.

That major shift in top management, together with the adverse effect the depression had on overall operations, brought about some drastic changes in all tropical divisions late in 1932. All salaries were reduced 10%. Production in the Chiriqui division was stopped for several months and many employees were released, not only on the farms but in all departments. Some of my oId pals were out but a few remained as caretakers” on the farms. Bob Cover kept his position as assistant district superintendent, at the reduced salary rate. One who definitely benefited by the change was Doc Dunlap.

Zemurray knew about him and made him Director of Tropical Research and transferred him to the Company’s new tropical headquarters in La Lima, Honduras. Sam named Walter E. Turnbull, his former top man in the Cuyamel Company, as General Manager of all tropical divisions. Naturally, all of the Cuyamel officers were assigned to important jobs in the different tropical divisions.

Armuelles, being partially closed down, was not affected too much by those top personnel changes for several years. Since administrative office work had been·greatly reduced, and due to my knowledge of farm operations, Mr. Block appointed me as Farm Inspector in October 1933.

I still lived in Puerto Armuelles and was assigned a motorcar to make daily trips to the farms, where I would ride with the “caretaker” of each farm, mainly to check on the vast system of drains and canals over the 50,000 acre project. Drainage had to be maintained at all costs since floodings or high water table would quickly kill out all banana plants. By the middle of 1934 operations were almost back to normal.

When, at 5 am on July 21st, 1934 a major earthquake rocked the whole area which was very close to the San Andreas fault.(***) Two-thirds of the wharf and three large overhead powered gantry banana conveyors were gone! The raised buildings in the division had only minimum cross bracing underneath so many slid sideways off the stilts, dropping to the ground. Fortunately there were no serious injuries, and no fires, since almost everyone was still in bed and the kerosene stoves in the labor camps had not been lit. 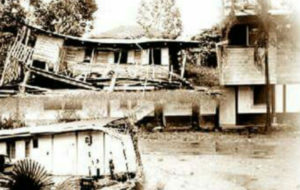 Example of earthquake damage in Panama

I dug out some clothes and made a hasty exit to join everyone else in town looking over the battered remains while in a state of shock. Fortunately some of the camps and residences were still “livable” and the large buildings such as the general office, hospital, club and nurses quarters which were built close to or on the ground were not damaged. By coincidence, a converted yacht, the “Nokomis” assigned to the U.S. Geological Survey Service had been working in the area for some time and was anchored close to Paridas island off Armuelles, almost directly over the epicenter of the quake, so it was well-recorded!

There was a continuous series of somewhat less violent shakes for a couple of months afterward, some still strong enough to break up some of the remaining glass and chinaware in the houses. On the golf course, when one of the minor “temblores“ would occur, the ground would break into a series of closely spaced waves a few inches high, making it impossible for one to stand erect and producing an extremely “queasy” feeling in the stomach!

Late in the afternoon on the day of the quake, KB said that Mr. Blair needed me badly in his office. There was no assistant manager in the division and Blair’s secretary, a young married girl, had quit because she was scared – and pregnant. Again, I was called upon to change jobs on a few hours notice, this time as secretary to the manager, a change that lasted for five years. Mr. Blair, (Hank) was very upset with all the radiograms, many in code, coming in by the hundreds, all wanting immediate detailed replies of damage, cancelling fruit cuts, ships’ schedules, etc. 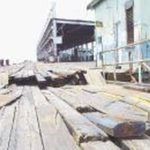 Employees worked day and night to determine extent of damage to buildings, the railroad, bridges, waterlines and towers and to the wharf, and estimates had to be made of materials needed and cost to.repair everything and get back in business. I became a combination manager, secretary, cable clerk, coordinator between departments, and soothsayer to some very worried co-workers. All were afraid the division would close down for good and that they would be released.

The abrupt change from being shaken out of bed by an earthquake in the morning to working for the manager in the afternoon had its rewards however. I got an immediate salary raise to $2400 a year and was assigned one of the best rooms in town in one of the few undamaged buildings, the single girls quarters! A telephone was installed in my room the next day. I had a typewriter in the room and a set of the Company radio code books since I was on call 24 hours a day, handling calls at night by messenger from or to the radio station and different department heads. Between calls at night, I was entertained in the parlor by the females with coffee, cookies and plenty of gossip. They were thrilled having a man living in their midst and I was a regular at the nurses and telephone operators night shift changes.

This hectic existence went on for several months. Engineers from Boston and other divisions came in to draw up plans for a new wharf and conveyors. Construction personnel from other divisions were brought in to supervise jacking up the fallen buildings and, as a future safeguard, install double cross-bracing under all of them.

Gangs of railroad maintenance men worked at straightening the railroad lines and repairing bridges. Electricians and plumbers were everywhere. Jerry Baron worked up a plan to load bunches of bananas by hand onto lighters and into ships. The lighters (barges) were rented and towed from the Canal Zone and, after a few months, ships were being loaded again, slowly to be sure. Thousands of letters, in addition to radiograms, were received and written in the manager’s office to coordinate all of this reconstruction and, worse, they all had to be filed.

Stay tuned for PART 9 of this story: Life in Puerto Armuelles 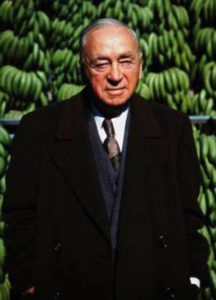 ***The Earthquake of 1934 became known as the “Puerto Armuelles Earthquake”, with a reading of 7.6 on the Ritcher Scale.