Snake Found in a Home in Puerto Armuelles

A few days ago, a local resident of Las Palmas, in Puerto Armuelles, found a live snake downstairs (under their house). Nobody was hurt and the snake was removed successfully. They took a short video that you can see HERE.

Living near jungles and farmlands, it is not uncommon to occasionally come across a snake. Most are not poisonous or aggressive. However, always be cautious because there are some deadly snakes in Panama, like most places in the world. This snake that was seen in Puerto Armuelles is called a Fer de Lance (La Terciopelo). It is a viper that is very important in its habitat in Panama as a predator of rodents and insects.

Below is an excerpt that talks about the Fer-de-Lance snake, taken from the US Army Field Guide, which has good information about snakes and how to handle living in harmony with them (anywhere in the world!). You can read the entire Guide HERE.

If you fear snakes, it is probably because you are unfamiliar with them or you have wrong information about them. There is no need for you to fear snakes if you know–

For a person wearing shoes and trousers and hiking or living in a camp, the danger of being bitten by a poisonous snake is small compared to the hazards of malaria or other diseases.

Nearly all snakes avoid man if possible. Reportedly, however, a few–the king cobra of Southeast Asia, the bushmaster and tropical rattlesnake of South America, and the mamba of Africa–sometimes aggressively attack man, but even these snakes do so only occasionally. Most snakes get out of the way and are seldom seen. 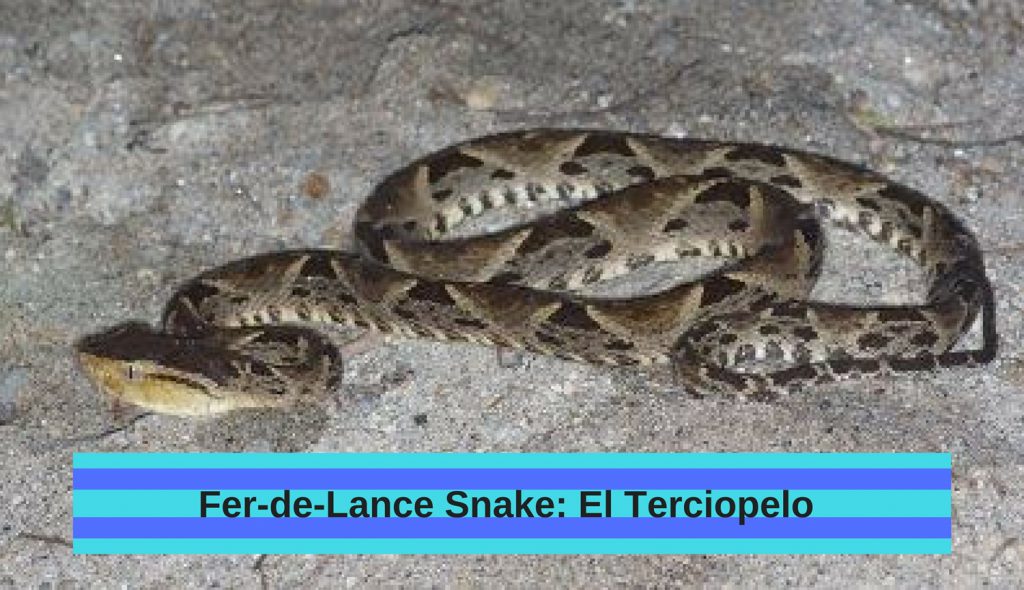 There are several closely related species in this group. All are very dangerous to man.

Description: Variable coloration, from gray to olive, brown, or reddish, with dark triangles edged with light scales. Triangles are narrow at the top and wide at the bottom.

Characteristics: This highly dangerous snake is responsible for a high mortality rate. It has an irritable disposition, ready to strike with little provocation. The female fer-de-lance is highly prolific, producing up to 60 young born with a dangerous bite. The venom of this species is hemotoxic, painful, and hemorrhagic (causing profuse internal bleeding). The venom causes massive tissue destruction.

“Agressive” is a misnomer for snake behavior toward humans; “defensive” is more accurate. When you step into the snake’s strike range, the snake feels threatened and instinctively strikes. The fer-de-lance, Bothrops atrox, is cryptically colored so that it blends almost invisibly against the rainforest floor.

If you get bitten by a snake: Try to take a photo of the snake to confirm the culprit (which determines the anti venom to use). Go straight to seek medical assistance. Use your cell phone to call ahead to alert the ER that you are on the way in. Move as quickly as possible in a safe manner, without panicking. Fer-de-lance snakes are experts at camouflage, and we all should remember we don’t have to travel very far to enter “their” territory. Be safe out there, folks…