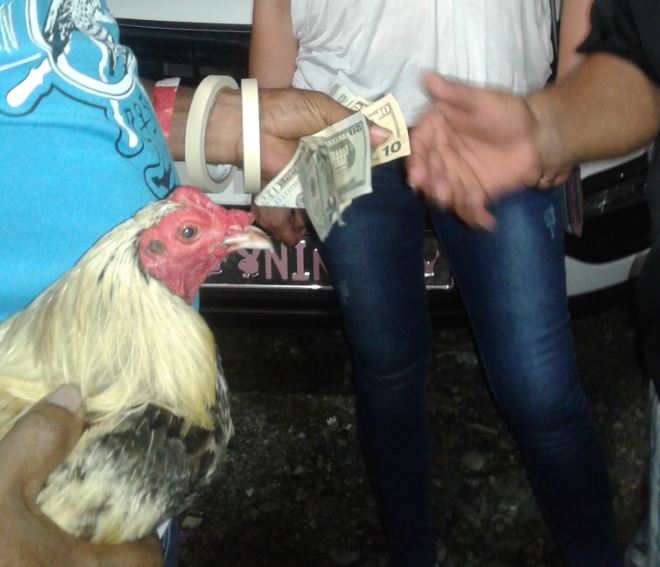 Let me start by saying that I do not condone this activity, which is illegal in many countries today. Actually, it was only completely banned in the USA in 2008! That said, cockfighting is a legal and very popular sport in Panama and a regular activity in Puerto Armuelles. I wake up every morning to the crowing of my neighbor’s roosters and have seen them training and working with their birds to prepare them for the fights. I decided, for the sake of reporting, to go and see for myself what the attraction is. 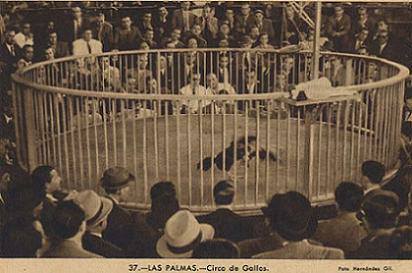 Cockfight in Panama 125 years ago

In Panama, cockfighting is a folkloric tradition inherited from the colonial Spanish.  Some of the most famous gamecocks include:

With a few friends in tow, I visited the “Paleas de Gallos” in Agua Buena, a barrio in Puerto Armuelles. I had an informative local guide who was going to have one of his roosters in the fights. He said he can make about $200 in one night, which is a lot for Panamanians who may earn that in a week or two of work. Gambling and sport are what this activity is all about. Being gracious to my host, I bet $5 on his bird and it was a winner, so I went home with an extra $4.

There were about 200 people who attended while I was there. It is as much a social event as any other gathering in Panama! I only stayed for 5 fights (until my friend’s rooster had its turn) and that was more than enough for me. The first few fights were pretty tame and I thought “this isn’t so bad”. I think they were “practice” fights because there were no spurs on the bird’s legs. The birds sparred for a few minutes then just sat down exhausted. Neither seemed to be hurt. Then, the serious fights started. In these, the birds are fitted with metal spurs and the fighting gets brutal. Often to the death or close to it. See a live video clip: HERE

The birds begin attacking each other by jumping, using their feet and beaks as weapons. Handlers yell instructions at their prize fighters and clap when they want them to attack. There is a lot of yelling and cheering as most of the attendees have a vested interest in either a bird of their own or a bet.  I found lots of Gallos for sale on the internet from $10 to as much as $500 each! 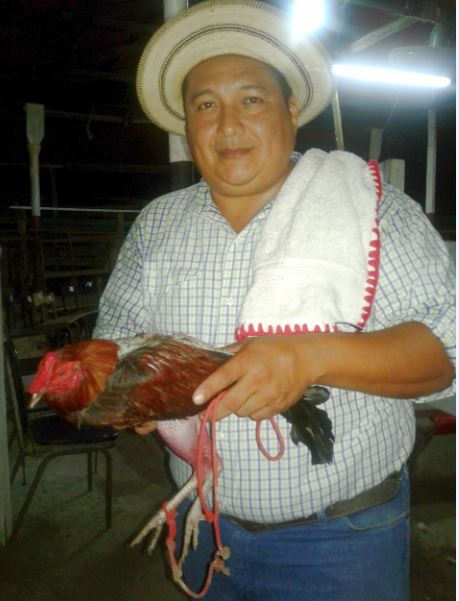 There is an arena covered in carpet remnants with front row seats you can sit in for $10 per chair. We paid $3, and got a wristband, to stand on the upper level, which had 2 rows to stand around the ring and watch. The place was full and we arrived there early and left early. It started after dark, about 7:30pm, and I was told it continues until about 4am. Each fight is several minutes long with a timer set and an announcer tells the attendees what is going on. There are weight classes so each rooster gets weighed and they are matched up outside. The owner of the winning bird gets a percentage of the bets that were placed on that fight.

Aside from the fighting arena, there are many more people mingling around outside. It’s as much a social event as anything else in Panama. There were mostly men, but I saw a few women and even some children. There is a little snack bar where you can buy $1 national beer, sodas, and food. We tried a bag of ribs and polenta for $2.50, with 5 pork ribs and 5 polenta. It was very tasty! We wandered around outside looking at the roosters lined up on perches for everyone to assess. The proud owners are stationed nearby and are happy to show off their contender. They will tell you their bird’s name and how strong it is to encourage you to bet on them.

*** You may not realize that roosters actually grow their own spur on their feet, but it gets removed when they’re young to prevent them from killing each other — something they do naturally.

This new artificial gaff is added to give the animal its weapon back, and help speed-up the killing process. Here is a video of how gaffs are attached :

Adding sharpened metal spikes is not natural, but artificial gaffs lead to quicker deaths then if the roosters were using natural spurs.

I have seen chickens in “civilized” countries that are raised on large farms for meat or eggs and I have to say they are raised in far worse conditions than these roosters, who are pampered all the way up until they have a short fight. I am not a fan, but it’s not the worst thing I’ve seen.

There are several Cockfighting arenas in and around Puerto Armuelles. I was told the next fights would be in 2 weeks. It is a regular sporting event here, so if you are interested in checking them out, watch for large painted signs along the road that announce the time and place of events. You might also ask a local cab driver or someone with a rooster in his arms, and they will be glad to tell you when and where to find an upcoming fight.

More information on cockfighting in Panama can be found on the Facebook Page: Entre Gallos Panama