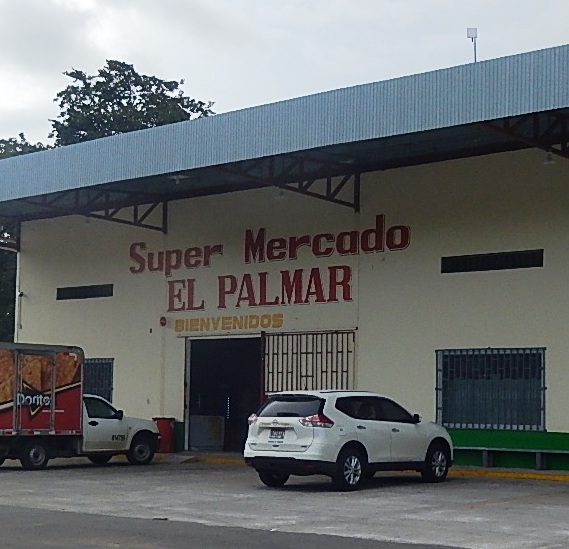 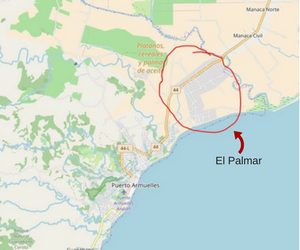 El Palmar is accessed by a highway that connects to the Interamericana at the border of Costa Rica. This road is nearly finished expansion from two lanes to four from the border to Puerto Armuelles, in order to prepare for expected traffic due to the transportation of goods to the main port.
The population of El Palmar is majority Latino, with few people of Afro-decendent and Indigenous heritage, and a few people of Asian decent. There is also a population of retired ex-patriates, including full-time and part-time, located along the beach from countries including the United States, Canada, Australia, and Germany.

A valuable source of information about the community comes from the 2010 census gathered from the Oficina de Censo y Estadisticas en David, Chiriquí. The total population of El Palmar according to the most recent consensus is 4,531.

The community members of EL Palmar have many different means of economic security ranging from self-employment, factory work, farm work, and small businesses.
Many people find work in neighboring communities around the corregimiento of Puerto Armuelles. For example, many parents of the children at school work in retail at the border, in the City of Puerto Armuelles and at the factories that make palm oil (Coopegoth and EBASA).

Many people create their own economic stability by working from home selling photocopies, sweets, ice, gelatin, fish and other seafood, dairy, eggs, and fruit. Some women offer laundry, ironing, and/or sewing services. Some people sell fruit, dairy and seafood door to door by truck and push-cart. Occasionally, people sell trinkets or ice cream in front of the school. Lottery ticket sales is popular and a group of women sell tickets in front of the school weekly.
There has been a recent influx of network marketing beauty companies, such as Avon, that many women have begun selling. Many men work as handymen around the community and some supplement their income as barbers in their homes. The community has at least 1 carpenter, 1 mechanic, 2 businesses for the sale of construction products, 3 large supermarkets, 6 small convenience stores, 8 informal restaurants (fondas), 4 bars, 1 nail and hair salon, and 1 lawyer based out of the home. My host family operates the kiosk at the school, selling breakfast, lunch, and snacks to students, teachers, and staff.
Positions held at the local schools and universities are largely occupied by people from neighboring communities who need to commute.

El Palmar is located along the coast where many locals spend weekends relaxing on the beach and even surfing or boogie boarding. During the week, however, the beach remains mostly empty. El Palmar Sur also has a popular traditionally Panamanian style seafood restaurant called “El Rancho” that opens at 3. It is known for its delicious guacho and fried seafood platter.

El Palmar has a diverse array of religious backgrounds including Catholicism, Evangelism, Jehovah Witness, and Seven Day Adventist. On Sundays and Wednesdays many locals can be found worshiping at church.

Located near the elementary school, a video game shop captures the minds of many teen and pre-teen boys in the community. With 4 tv screens and benches for 8, people can pay $1 per hour to play popular international video games. This shop also offers $1/hour wifi and printing and copying services. This shop is popular on evenings, weekends, and free days from school.

The people of El Palmar are some of the most friendly and generous people you will ever meet. The culture in the community includes a typical, traditional dance (baile tipico), school bands,

El Palmar has many great organizations in which people can get involved. One such organization is the Special Olympics. Every Saturday from 8-10, coaches and volunteers meet with students and adults with disabilities to practice for national Special Olympics competitions including volleyball, softball, track, and relay activities. They are always looking for volunteers to share their expertise in a sport and to continue to boost the morale.

Another organization is Madres Maestras. Based out of two Catholic churches in El Palmar, Madres Maestras is a group of mothers and grandmothers that offer pre-school services to support young children in the community, and to alleviate the stress for working and studying mothers.

Largely organized and supported by the expatriate community is the Veterinary Clinic that travels to El Palmar once a month to offer free and low-cost medical attention for pets. Community members are encouraged to bring their own pets as well as strays for vaccinations and sterilization. The clinic currently is hosted at Koco’s Place in on the main highway to Puerto Armuelles.

Read about the Spay-Neuter Clinic HERE

El Palmar has everything you need within walking distance, but I prefer to cruise around town on my bike. There are two main grocery stores on the main highway through town, Supermercado El Palmar and Supermercado La Cuchilla. There are two main hardware stores in town located across from the former supermarket and next to the latter. If you are looking for uniquely crafted wooden tables, chairs and doors, there is a friendly carpenter across the street from Supermercado La Cuchilla. Throughout town you can find small convenience stores offering snacks, drinks, and all of your basics if you ever run out and don’t want to go all the way to the supermarket. My favorite places to enjoy my breakfast and coffee on the weekends are the fondas, or small, informal outdoor dining spaces run from kiosks. There are many located on the highway, all with traditional Panamanian menus.