What is PTP: That Facility Just South of Puerto Armuelles? 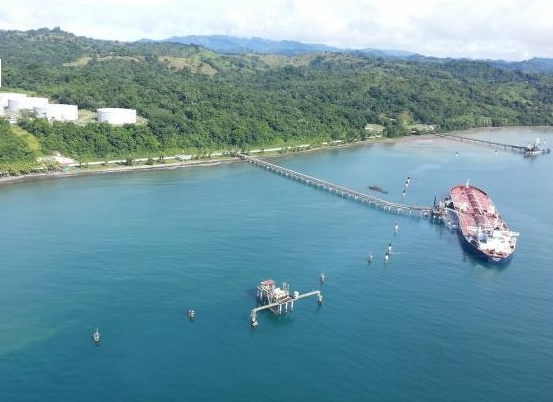 The first time you drove south of Puerto Armuelles, heading down the Burica Peninsula about 5 minutes, you probably made a U-Turn when you came to the guarded and gated entrance to PTP. It doesn’t look like a place that tourists could drive into. Once you get the lowdown however, you’ll know that you can proceed through the facility after showing your ID and getting a Plaque from the guard on duty. It is an interesting day trip to drive through PTP and view their impressive operation.

The company known locally as PTP, is Petroterminal of Panama S.A. From the beach in downtown Puerto you can see the large oil tankers, docks, and tanks across the bay of Charco Azul. Its able to bring the large ships right up to docks because of the steep drop off in the ocean depth just a short distance from shore. PTP has facilities for the storage and handling of crude oil products and by-products on the Atlantic coast (Terminal and General Cargo Dock are located in Chiriqui Grande, Province of Bocas del Toro) and Pacific coast (Puerto Armuelles) of the Republic of Panama, with a 131-kilometer pipeline that runs through the Panamanian Isthmus between them.

PTP was born from a joint venture in September 1977, after a proposal from brothers Harold and Raymond Bernstein to the Panamanian Government. The project was developed and is administered by NIC Holding Corp., an independent company dedicated to the storage and handling of crude oil products and by-products with headquarters in Melville, Long Island, New York, United States. PTP has administrative offices in Panama City and David, Panama. 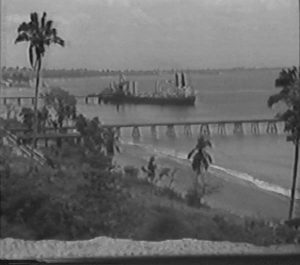 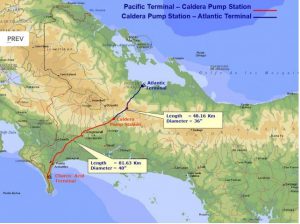 In 1980, PTP reached a new agreement with the Panamanian Government which authorized the construction of a Transisthmian Oil Pipeline and an oil terminal located on the Atlantic coast, in Chiriqui Grande, Bocas del Toro.

PTP boosted the economy of the western region of Panama, directly benefiting the eleven municipalities through which the pipeline crosses. The Government of Panama also continues to benefit from the dividends of it’s 40% of shares in the company. 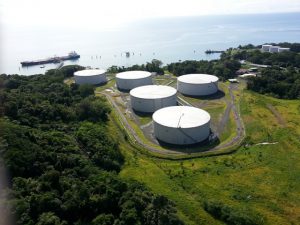 Changes in U.S. petroleum by-product legislation in 1996 caused the Pipeline to have to cease operations from 1996 through 2003. PTP continued to operate the terminals during this time, while the pipeline underwent a rigorous program of inspection and maintenance.

From 2008 – 2012 PTP constructed Phase I and II expansions on both coasts, adding a staroage capacity of 15 additional tanks, for a total storage capacity of approximately 14.6 million barrels in the Atlantic and Pacific terminals. 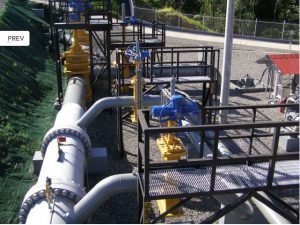 The Puerto Armuelles PTP terminal is composed of two crude oil and petroleum product loading and unloading docks with berths for tankers of 28,000 to 265,000 tons capacity. The size of these ships serviced are up to a length of about 1,100 feet and draft of 80 feet. Tug boats and pilot assistance are required to bring the ships in and out of the docks.The crude oil is discharged through pipes and stored in holding tanks. There are 11 storage tanks at this facility, while the others are on the Atlantic side. The oil and refined products can be transported to other ships or pumped through the pipes, across the ithsmus, to the Chiriqui Grande terminal.

PTP is not a refinery. It only transports and stores crude and refined oil products. 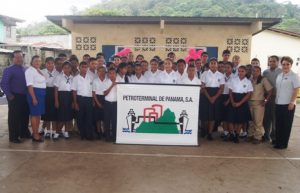 Today, PTP continues to operate, providing jobs and training to it’s personel, while giving back to the community in educational and environmental programs. There is a PTP Scholarship Foundation which provides scholarships to academically outstanding teen-agers at high school and university levels, in the communities nearby their facilities.

Although you can find dozens of photos all over social media and other internet sites, there are signs throughout the terminal saying “NO PHOTOS ALLOWED”. For this reason, the photos used in this article are all courtesy of the PTP website.

The next time you have guests in town or just want to take a day trip and see something new, drive out to PTP and take a look at this impressive operation only a few short minutes south of Puerto Armuelles. You can also visit their website for more information about the company and its operations. www.petroterminal.com